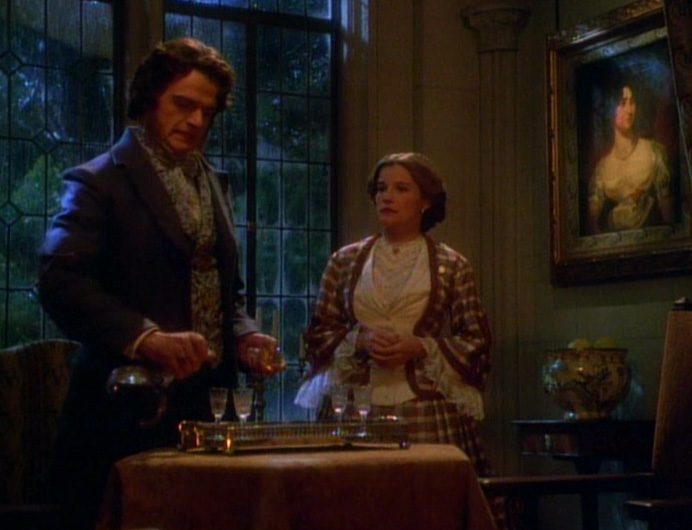 Cathexis couldn’t start any worse: Janeway‘s in the holodeck (again! There’s nothing else to do on Voyager, the Heroes and Demons’ lesson hasn’t been learned) and participates in the most boring program of the history of Star Trek. Really, I can’t imagine anything worse than Janeway’s program, even though deep down it suits the gray character she has proven to be so far. And now let’s start with the actual episode!

Tuvok and Chakotay return from a trade mission in very bad shape, especially the second one who’s clinically dead, or at least he would be on XXI century Earth (he has no brain activity). The plot of this episode is a variant of the standard plot with a presence on board possessing one crew member to do something shady. For example, think of The Next Generation’s Violations and Power Play (both in Season 5) and of Deep Space Nine’s The Assignment. Actors usually like this type of episodes as it allows them to play alternate versions of their characters.

In this episode, the presence apparently wants to prevent the USS Voyager from returning to the scene of the accident: a dark matter nebula from which Tuvok claims to have seen a ship coming out to attack the shuttle he and Chakotay were in. It even manages to eject the warp core! The plot concentrates on the investigation by Janeway and the faithful Tuvok and we the viewers understand what’s going on far before our heroes.

Let’s face it, this isn’t a great episode: as mentioned before, the plot is unoriginal and therefore the final solution also feels unimaginative. The thing I liked the most is seeing the captain’s confidence in his subordinates put to the test once again. The adventures in this quadrant are demonstrating to Janeway that she must be alert and ready to question everything she’s always believed in and all the principles she’s always adhered to. I think I made myself clear, and let me put a spoiler which I think invalidates the whole plot of the episode in the following PS. Ciao!

PS: If the presence was capable of actions like changing course and ejecting the warp core, couldn’t it just write somewhere “Hey, I’m Chakotay, Tuvok is possessed, there’s no ship in the nebula, please do something!“???

PPS: The Delta Flyers podcast shoutout: It reassured me to discover that even according to Robert Duncan McNeill this episode is not that great (despite being written by two Star Trek giants like Brannon Braga and Joe Menosky) and that the opening scene in the holodeck room was too long and utterly useless!