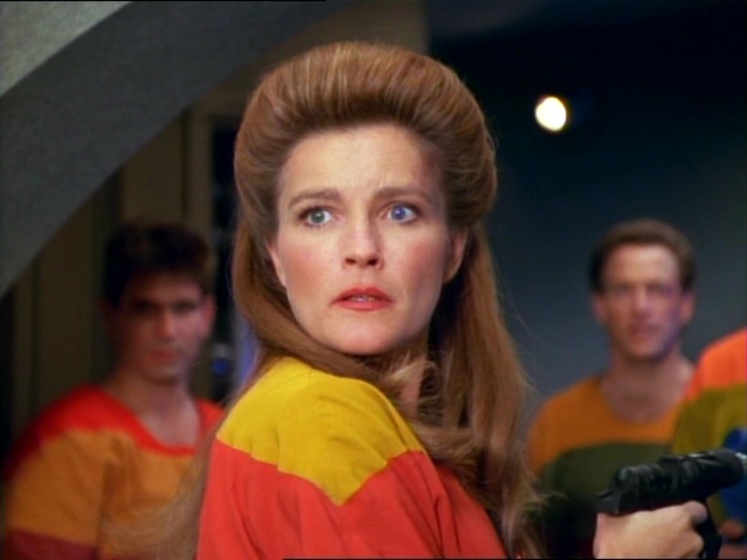 Time and Again, like the previous Parallax, almost feels like a filler rather than an episode capable of starting with a bang Star Trek: Voyager. Curiously, there’s another temporal anomaly that confuses Tom Paris, and exactly like in the pilot episode, the USS Voyager crew goes once again the Prime Directive! But let’s start from the plot.

While investigating a catastrophic event on a planet near the Voyager’s homeward route, Janeway and company realize that an entire planet has just been razed to the ground by an explosion. They beam to the planet’s surface shortly thereafter and find out that the catastrophe is linked to the use of a notoriously unstable energy source. The problem is that both Janeway and Paris fall into a space-time rift and find themselves on the planet within hours of the disaster! What can to do?

The premise is absolutely great (like those of other Star Trek episodes with space-time paradoxes such as the wonderful Yesterday’s Enterprise, TNG’s third season, or Cause and Effect, TNG’s fifth season), but unfortunately the development is sub-par… Maybe part of the blame should go to the limited budget allowing for just twenty extras to characterize a large city of a planet inhabited by millions of people. The scenes with the ecoterrorists kidnapping Janeway and Paris and taking them into the deserted power plant protected by a couple of guards are anything but engaging, and the clever final twist only partially reactivates the attention of the viewer.

At the end of the episode, we’re at the starting point so that everything that happened hasn’t basically happened. This is normal in a series with episodes containing each one a self-contained story (which I continue to prefer to today’s series where if you watch a random episode you don’t understand anything because you don’t know what happened in the previous ones). But Time and Again perhaps lacks a bit of the serial element that was working so well in DS9 when this episode aired: there’s no character evolution, this is just entertainment for the sake of entertainment. And that’s why I initially called this episode a filler: pleasant, watchable, but in my opinion not suitable for properly starting a new series with interesting characters. The first seasons of TNG and DS9 weren’t great either, indeed they’re certainly the weakest in each of the two series, but I was hoping that the producers and screenwriters had learned that lesson with Voyager… Let’s see if the next episodes are capable of delivering something more fulfilling! Ciao!

PS: I liked the little moment in which Kes feels the first signs of the mental powers of his race that had been anticipated in the first episode… I foresee great things for her (she seems like she could become a sort of Deanna Troi, who knows?)! On the other hand, it seems that the logic remarks by Tuvok were not well exploited in the plot of the episode.

PPS: While rewatching the episode (for their podcast The Delta Flyers), Robert Duncan McNeill and Garrett Wang laughed at how McNeill knocked out with unrealistic punches à la Kirk the stunt coordinator Dennis Madalone in a scene on the planet!