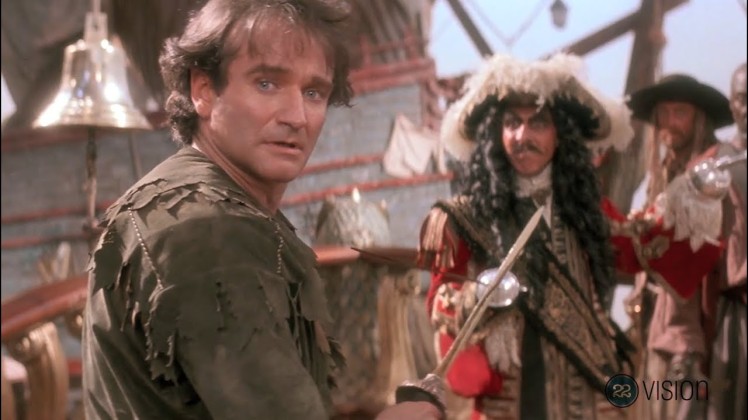 I know, I know. Being this a Steven Spielberg project, I shouldn’t write anything about Hook, his 1991 film starring Robin Williams and Dustin Hoffman. For sure there are multiple hidden meanings that I didn’t understand and various intelligent metacinematographic ideas that I missed. But since I recently rewatched it and it didn’t particularly impress (again), I decided to share my thoughts on the blog, perhaps attracting some hate from the many people who love this movie and consider it an untouchable classic. Well, I just don’t.

First of all, I don’t consider it a classic because the real classic is J.M. Barrie’s Peter Pan, a book that I read twice and that I liked a lot despite its hard beginning-of-the-XX-century English language. And Barrie’s book is light years away from Spielberg’s film.

And then I just can’t stand Hook. Robin Williams was a great actor, but I find it painful to see him acting like a kid among actual kids. Not to mention Julia Roberts, whose performance is limited to smiling numbingly in front of a green screen throughout the film except in an utterly non-sensical scene where she grows up, kisses Peter (Robin Williams), and then returns to being the usual Tinkerbell. What…?

Then I would like to see each and every one of the Lost Boys killed by Hook (Dustin Hoffman) exactly like it happens to the unbearable Rufio (Dante Basco). And he’s hte only one who dies! There’s an extremely long fight with dozens of bloodthirsty pirates and only one child dies (and he’s not that young, by the way)! Being Spielberg, I’m actually amazed that Rufio got killed, now that I think about it.

But, speaking of fights, I must praise the exceptional choreography of the film with dozens and dozens of extras around beautiful sets, beautiful but not at all realistic. And maybe that’s done on purpose, but the whole world seems like an amusement park, not an island actually inhabited by pirates! The soundtrack by the usual John Williams is equally excellent, probably the best thing of the film together with Dustin Hoffman playing he title role which gives him the opportunity to deliver the best lines of the whole screenplay (which takes a lot from Barrie’s book). Bob Hoskins is also perfect as Smee.

As for the rest of the movie… The ending is known since the beginning: Peter is a cold man who forgot how to love and he will clearly become a better person by the end of the adventure. Nothing original there. And then, and allow me to repeat myself, Robin Williams throwing food at children and having fun like one of them just doesn’t work for me, exactly like the battle of insults with Rufio. I had the same feeling when I watched Roberto Benigni playing Pinocchio in his 2002 film called, of course, Pinocchio: I find it unbearable, not credible, and even a little disturbing. Finally, all the digital special effects have aged very badly, the early nineties green screen didn’t deceive anybody back then, and it’s even worse thirty years later.

But, as said, we’re still talking about Spielberg, a director who knows how to shoot all scenes with great craftmanship, and there are quite a few interesting scenes: the sword fights, of course, but also the dialogue between Hook and Smee in a room full of mirrors, and the scene in which Peter discovers that his children have been kidnapped with the camera that almost leads the way following Hook’s traces.

But even if there’s no shortage of positive elements (let me add the always perfect Maggie Smith), in my opinion Hook is a predictable film which doesn’t convince me and in which I don’t feel empathy with any of the protagonists. Here, I said it, or rather, wrote it. Ciao!

PS: speaking of those multiple hidden meanings… Peter at the beginning of the movie is an alcoholic, the voice of the captain of the plane is Dustin Hoffman’s, and Smee is a guy taking a stroll in Hyde Park. Could the whole story be Peter’s alcohol-induced delirium? And maybe the fact that Never Land looks like a movie set is done on purpose because it’s just a dream? Or perhaps it’s because we are all actors in the theatre of life… No, Mr. Spielberg, this time you won’t fool me! I won’t get lost in strange mental reflections to defend your movie!