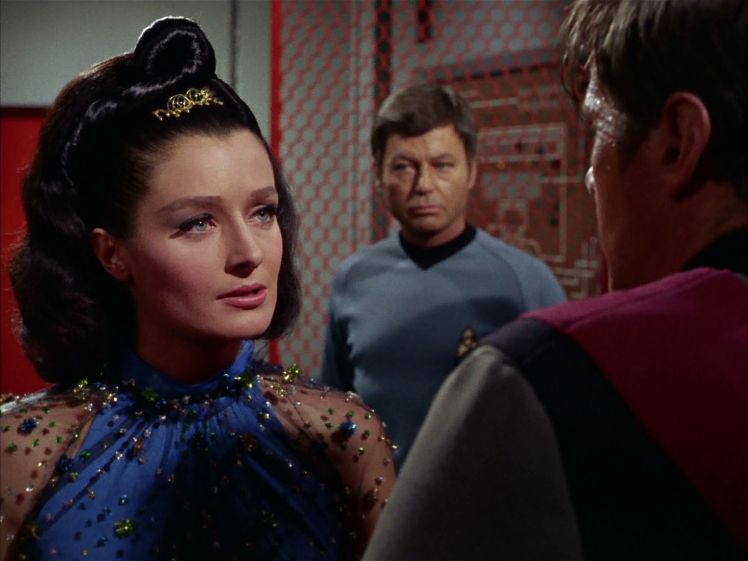 It’s not easy to write about the fifth episode of the third season Is There in Truth No Beauty?. Diana Muldaur returns to Star Trek here, this time as a blind person with psychic powers, after her appearance in Return to Tomorrow the previous season. I give this episode a pass just because of here presence: she’s beautiful and she’s a good actress, and she carries a story that suffers at times due to a confusing screenplay that doesn’t seem to find a theme to develop (and therefore touches on several themes without giving any of them real depth).

Here’s the plot. The USS Enterprise must transport the Medusan ambassador Kollos, belonging to a highly evolved race whose appearance is so horrible that the mere sight of them can drive any human instantly crazy. The ambassador travels in a container and his contact with the outside world is Dr. Jones (Diana Muldaur). At the same time, on board there’s also one of the creators of the ship, Larry Marvick (David Frankham), an ex-lover of Jones. Due to jealousy, he tries to kill the Medusan ambassador, fails, and takes the Enterprise out of the galaxy to a psychedelic area of ​​space. But space isn’t the only psychedelic thing in this episode!

The appearance of the Medusan is rendered on screen with flashing lights, and throughout the episode the director Ralph Senesky enjoys using wide-angle lenses, distorted subjective shots, an imaginative and extremely tight editing, and a very engaging soundtrack. After many episodes of run-of-the-mill direction, finally here’s something to remember, an episode that really shines in the technical department!

As said, however, this episode cannot be considered completely successful. Some scenes are semi-unacceptable, such as when Kirk and McCoy seem to have never seen a woman and persistently stalk poor Doctor Jones at dinner or when, in order to distract Ms. Jones, Kirk takes her for a walk in the arboretum (by the way, the arboretum thing is something else seen in subsequent Star Trek series which comes from the original series). Not to mention the confusing ending, with those protective glasses that sometimes are needed, sometimes not, and doctor Jones pushed to the brink of nervous breakdown by a pressing Kirk worried about the fate of his great friend Spock.

There are too many things here, with the episode exploring solitude and ambition, lost love and technobubbles with the ship lost beyond the galaxy… But there are also many positive elements, such as the consideration on Kollos who can either be too repulsive for humans, or too beautiful! In short, is truth beauty (or vice versa)? It’s such a rich episode that it’s inevitable for it not to succeed 100%, but give me ten episodes like this that try to do something new and partially fail rather than episodes such as the first one of the third season with the theft of Spock’s brain (Spock’s Brain)! Ciao!

Previous episode: And the Children Shall Lead

Next episode: Spectre of the Gun