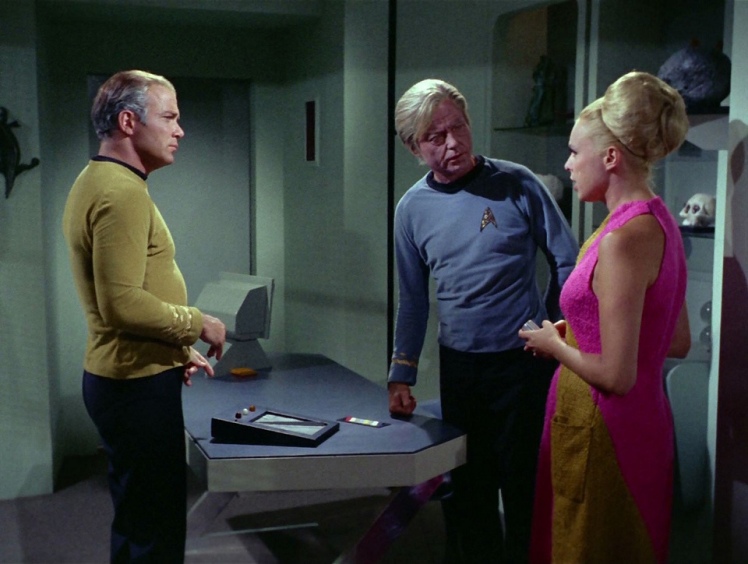 The twelfth episode of the second season of Star Trek: The Original Series is truly powerful. The Deadly Years deals with the difficult subject of old age and in a delicate way and at the same time delivering an action-packed story that highlights once again Captain Kirk’s genius. At some point it drags a bit, as for example during the trial that I found out of place and superfluous. I also didn’t enjoy the useless love story between Kirk and the endocrinologist Janet Wallace (Sarah Marshall), but overall I found it a good episode!

Here’s the plot. On a routine visit to the Gamma Hydra IV colony, Captain Kirk and the rest of his landing party (Spock, McCoy, Scott, Chekov and Lieutenant Galway, played by Beverly Washburn) find something odd: only two colonists are still alive and the others are all dead… of old age, despite being all in their thirties. And even the ones who are alive, Robert Johnson (Felix Locher) and his wife Elaine (Laura Wood), look like old men with hearing and sight problems. What happened? The mystery is intriguing, but above all it becomes serious when Kirk begins to manifest the same symptoms: and after a while it becomes clear that all those who have gone down to the planet have the same problem, all except Chekov!

So it’s a race against time for Dr. McCoy (who’s himself among those who are aging at an incredible speed) and Janet Wallace to understand the cause of the strange phenomenon and, above all, to find the cure! Add the the proximity to the neutral zone near the border of the Romulan Empire and the possibility of another conflict after the one we witnessed in Balance of Terror some time ago. But the thing that really works here is how old age is depicted, with our heroes who are unable to perform their duties on board the Enterprise: slowed down and with memory problems that closely resemble the most common symptoms of Alzheimer’s, it’s really touching to see the rapid decadence of Kirk, Scott and McCoy (not to mention the death of poor Galway).

The episode slows down a little with the umpteenth trial, this time asked by Commodore Stocker (Charles Drake), who wearily repeats all the embarrassing situations experienced by Captain Kirk to prove that he should no longer command the ship, which brings Stocker to the captain’s chair. Luckily, this leads to a splendid resolution after the incident caused by the inept Stocker which puts the Enterprise in extreme danger, taking it to the middle of the neutral zone surrounded by Romulan ships. Kirk, finally cured by McCoy and his colleague, saves the day with a fantastic bluff reminiscent of The Corbomite Maneuver (he even mentions that material).

In short, this is yet another good episode that makes us reflect on how our society quickly sets aside its weakest individuals, in this case the elderly, and that makes us think about how limited our time is and how we’re destined for an unavoidable decline. And all this is convincing thanks to the excellent performances of the various William Shatner, DeForest Kelley and Leonard Nimoy, aided by some excellent make-up. Ciao!