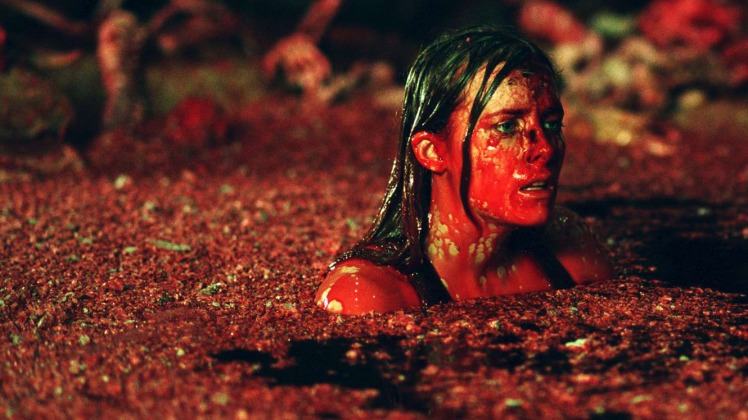 The Descent is a 2005 British film directed by Neil Marshall with six female protagonists: Shauna MacDonald, Natalie Mendoza, Alex Reid, Saskia Mulder, MyAnna Buring and Nora-Jane Noone. I think that this is one of the best horror films released in the last twenty years and I love Neil Marshall as a director (he also made Dog Soldiers, 2002, Doomsday, 2008, and Centurion, 2010, before disappearing from the big screen to work on television series, unfortunately). It’s a pity that few people know The Descent, it deserves much more! Not only is it well made, but it’s intelligently written, it leaves room for at least a couple of credible interpretations one more shocking than the other, it’s scary… and it has an all-female cast before it became the new fashion in Hollywood (think of the horrendous Ghostbusters remake released in 2016).

What’s the plot of The Descent? A year after losing her husband and daughter in a tragic car accident, Sarah (Shauna MacDonald) reunites with her group of friends to visit a cave in a national park. And here’s the first film reference: the Chatooga National Park doesn’t exist, but the Chatooga river does and it’s where Deliverance by John Boorman (1972) was filmed; this is one of the films that inspired Marshall for The Descent. Juno (Natalie Mendoza), the most enthusiastic and sporty of all, leads the group and initially everything seems to be going well: the friends reach the entrance of the cave, they enter, and the exploration begins. Sarah, however, has some troubles and she has a panic attack in a very narrow tunnel that is followed by a landslide that obstructs the way through which the group entered the cave. How to get out? Easy: there should be three different exits of this cave. Unfortunately, however, Juno brought her friends in an unexplored system with the intention of naming him in their honor once they found the exit… but now this game just turned into a survival matter!

Marshall does a tremendous job in writing, as well as in directing: we witness how the friendship between the six girls breaks up slowly, as relationships become more tense as they penetrate more and more into the bowels of Earth… And here it’s impossible not to think of John Carpenter’s The Thing (1982), which is certainly another source of inspiration for this film. Things start to get seriously bad when Holly (Nora-Jane Noone) falls and breaks her left leg. And then… let me pause here! If you haven’t seen the movie, please get it and watch it as soon as possible, you won’t regret it. In any case, be aware that there are spoilers in the paragraphs below.

So… when things seem they cannot get any worse, here come some humanoid creatures that live in this system of caves and feed exclusively on meat. For them, the six friends are nothing but a meal! Don’t think that Marshall wastes the “monster” card without an adequate introduction: first of all the crawlers (as Marshall calls them in the interviews about the movie) only appear in the last third of the film. But above all, in the first part of it there are shadows, movements in the distance, subtle signals that contribute to increasing the tension and the scenographic effect once the features of the creatures are revealed. And being this a very dark film, it’s really scary to see flashes of these vampire creatures moving fast in the caves! The last part is fast-paced, exciting, and leads to a finale which is nothing short of amazing. I’m talking about the one released in Europe: in the United States the film ends with Sarah in the 4X4, while in the European ending that turns out to be just a dream and Sarah remains trapped in the cave alone and in total darkness.

This gives rise to an intriguing interpretation of the film: in the final scene, Sarah is not surrounded by the crawlers, she’s completely alone. What if those creatures were nothing but an invention of her mind? What if she was the one who killed her friends after losing her mind, especially after discovering that her husband was cheating on her with Juno? In a period in which Todd Phillips is praised for Joker in which it can be assumed that everything we see is nothing more than a story by Arthur Fleck from the psychiatric hospital (but if that were the case, half the things in the movie wouldn’t make any sense!), Neil Marshall made a film open to two interpretations that can both work, giving an incredible depth to the movie. On the one hand, the crawlers are credible: they are creatures that have adapted to the absence of light and that eat animals presumably luring them into traps to make them fall into their caves. On the other hand, Sarah takes psychiatric drugs, she hasn’t yet overcome the loss of her family, and she has panic attacks as soon as she enters the cave (and it’s her who sees one of the creatures first). The descent of the title can be interpreted both literally and as a descent into madness of the protagonist.

In short, in my opinion this is a great movie. Among other things, it is also technically impressive: all shot in a studio, it seems incredible that it wasn’t shot in a real cave! The soundtrack is beautiful, the acting is pitch-perfect, the direction and cinematography are fantastic… If I could, I would have Neil Marshall making a new movie every year! Ciao!

2 risposte a "The Descent: Movie Review"