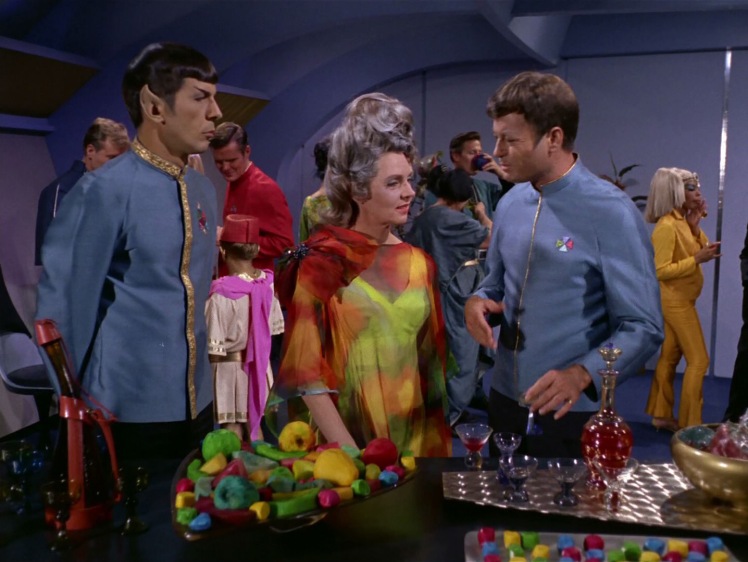 I don’t even know where to start with this tenth episode of the second season, Journey to Babel: it’s so full of ideas! Surely this is one of the best episodes of the entire series so far, it even anticipates somehow the plot of the best film of the Star Trek saga, that is Star Trek VI: The Undiscovered Country (1991), with a conference with ambassadors of the most diverse civilizations and a sabotage which includes the use of a cloaked starship. But that’s not all! There’s also time to introduce Spock’s parents, Sarek (Mark Lenard, already seen as a Romulan commander in Balance of Terror) and his human wife Amanda (Jane Wyatt); our heroes save Sarek’s life after detecting a terrible illness; and there’s an intelligent commentary on the internal conflict experienced by Spock due to his being half Vulcan and half human.

In short, it’s a really dense episode that still manages to develop everything in a fairly balanced way, even if perhaps the sabotage subplot of the conference doesn’t make much sense (why the murder on board if the plan was to attack the Enterprise and possibly cause many more victims?). But it’s not important! In fact, the conference about the Federation admission of the planet Coridan is just an excuse to have a multitude of humanoids wondering around in amazing group scenes that really give an idea of ​​the diversity of the humanoid life forms of the Universe. The blue Andorians with their adorable antennae and the pig-like Tellarites are particularly relevant in the story, but I won’t summarize it in detail to avoid big spoilers.

While the high number of guest stars makes the episode lively and fun to watch, and the double mystery of the murder on board and the cloaked spacecraft makes the plot intriguing enough to keep the attention alive until the end, the relationship between Spock and Sarek gives depth to the episode. The relationship between father and son is not idyllic, with Sarek who never accepted Spock’s choice to join Starfleet instead of devoting his knowledge and energy to the peaceful Vulcan Science Academy. His wife Amanda does what she can to mediate between the two, but they’re stubborn (although they would never admit it) and her task isn’t easy. The cold use of logic governs their lives and here we see it to the extreme, with Spock delaying a surgical operation on Sarek, something which could prove fatal, because the logical thing to do is to remain in command of the ship at a time of crisis (with Kirk knocked out in the infirmary).

Luckily, Kirk heroically returns to his place against McCoy’s advice in order to allow Spock to save Sarek in a tense scene with the Enterprise under attack! In short, there’s really everything you could desire in this episode, and, as I wrote, it all works: I was glued to the screen from beginning to end, curious to know who was trying to sabotage the conference as well as the fate of Spock and Sarek. Not to mention the numerous elements added to the mythology since we finally see the Federation diplomacy in action to solve interplanetary problems! And it’s nice to see Sarek and Amanda holding hands the Vulcan way (a rather ridiculous way, to be honest) and behaving like a perfectly logical couple. In other words, cold, for us earthlings of the twenty-first century!

To conclude, even the usual comedic closing scenes are great, with McCoy who finally has the last word on Kirk and Spock! What more can we ask for? Journey to Babel enriches the Star Trek universe, it entertains from beginning to end, it has a mystery and also a family drama, and it also works on the comical side! If not the best episode so far, it’s certainly in an ideal top 5! Ciao!