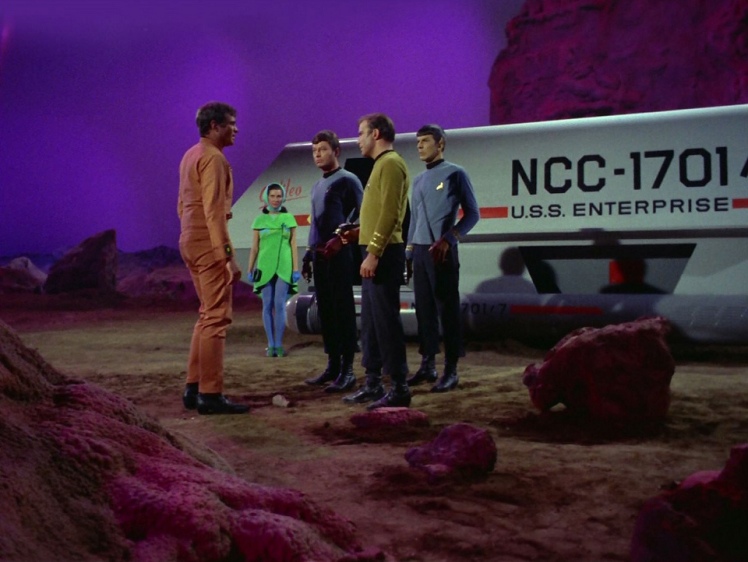 The ninth episode of the second season of Star Trek: The Original Series finally does what Gene Roddenberry’s Star Trek does best: it expands the mythology. The Star Trek universe offers so many possibilities! Here we meet none other than Zefran Cochrane, the inventor of the warp engine, the man who single-handedly made it possible for humans to have their first contact with the Vulcans! But let’s start from the plot.

Kirk is aboard a shuttle together with Dr. McCoy, Mr. Spock and the beautiful Nancy Hedford (Elinor Donahue), a Federation commissioner. Their mission is to cure her from a rare disease by taking her to a space station and then bring her back to Epsilon Canaris III where Miss Hedford is working on a peace process. Unfortunately, however, the shuttle (the Galileo, the same of the episode The Galileo Seven) is hijacked by a strange cloud and our heroes find themselves on a planetoid with an Earth-like atmosphere and, apparently, only one inhabitant (Glenn Corbett) who introduces himslef as Cochrane.

Having seen (several times!) Star Trek: First Contact (1996), I immediately knew who he was, but Kirk and the others understand that only after a while. Well, how can you blame them? Cochrane had disappeared 150 years earlier! The explanation? A being with extraordinary powers has preserved and kept him alive for all this time. Actually, there’s something more going on, but in 150 years Zefran Cochrane has never noticed it: the being is in love with him! It brought Kirk’s shuttle to the planet to give him some company, and… well done! Poor Hedford dies so that the being can occupy her body and finally make love with the beautiful Cochrane.

So, what about this episode? Although I appreciated the addition of a mythology piece to the Star Trek universe, the episode itself didn’t impress me much. The death of Nancy Hedford is taken very lightly by everyone, with Kirk declaring “The Federation will find another woman to bring peace to Epsilon Canaris III!” which is stunning. And, above all, Glenn Corbett just wasn’t a good actor. During the episode, he keeps the same expression all the time, with his big blue eyes and his muscular features typical of a Sixties’ American alpha male, and as a result his scenes are far from convincing. Too bad, because perhaps with better guest stars (Elinor Donahue doesn’t shine either) this episode could have been among the most memorable ones. It’s not, even though the introduction of Cochrane is the first step towards building this beautiful character played by James Cromwell in First Contact in 1996! Ciao!

Next episode: Journey to Babel