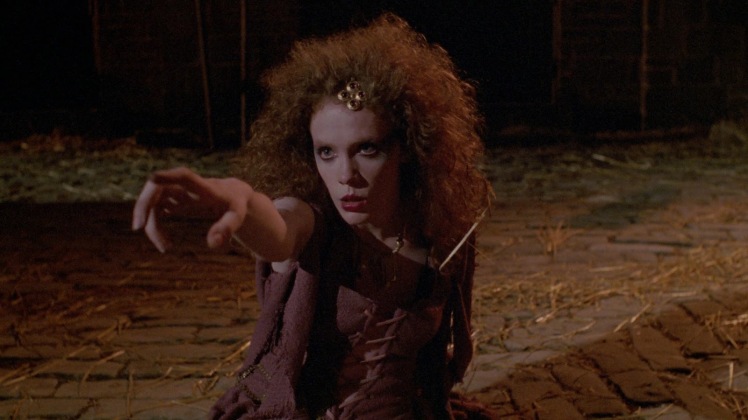 Two Evil Eyes is a 1990 collaboration between Dario Argento and George Romero, two masters of the horror genre. There are two separate episodes: The Facts in the Case of M. Valdemar directed by Romero starring Adrienne Barbeau (The Fog, Escape from New York), and The Black Cat directed by Argento starring Harvey Keitel (Taxi Driver, Pulp Fiction). With the special effects of the great Tom Savini, this movie is a horror gem paying tribute to Edgar Allan Poe: both stories were written by the XIX century American writer, although in the movie they are set in the contemporary era.

Romero’s episode is the first of the two. The old rich guy Valdemar (Bingo O’Malley) is dying and his young partner Jessica (Adrienne Barbeau) is doing everything she can in order to take as much money as possible before risking losing it in legal disputes with the rightful heirs of Valdemar’s family. The unscrupulous doctor Robert Hoffman (Ramy Zada) helps her by using hypnosis to use Valdemar like a puppet. Things get complicated when the old man dies before the two have completed their plans, and especially when the cadaver begins to speak…

This episode is really well made. Not only does it respect and broaden the idea of ​​Poe’s death under hypnosis, but it puts it in a credible context (it’s not uncommon to read about grandparents put in freezers by people who want to continue collecting their pensions) with characters that are as despicable as well as realistic. Both Jessica and the doctor are only interested in money and their greed will eventually cause their death. And Romero seems to suggest that they deserve such a horrible death, even despite the fact that Valdemar himself wasn’t a good person! There are no good guys in this sordid story of greed, and even the doctor who seems to get away with it eventually falls victim to his own hypnosis. The finale, among other things, is very reminiscent of John Carpenter’s The Fog in which Blake and his crew return to claim the life of Father Malone. Interestingly, that movie also starred Adrienne Barbeau (who at the time was Carpenter’s wife).

In the second episode, The Black Cat, the protagonist is photographer Rod Usher (Harvey Keitel) who works on the most horrible crime scenes in town. He lives with young Annabel (Madeleine Potter) who one day brings home a black cat. Evidently working with corpses all the time is not good for Rod’s mental health, who in search of inspiration begins to photograph the cat and then kill it in a fit of rage. Annabel realizes that something is wrong but after a few days, just about to run away from the house where Rod has become increasingly violent, he brutally murders her in a really scary scene. But the black cat will come back to haunt him…

In my opinion, this episode is inferior to the first both because of the acting of the non-leading actors (all except Keitel, basically), and because of some plot twists that would have worked better in a comedy like Weekend at Bernie’s (1989) rather than in a horror movie. Despite this, there’s a strong message which is conveyed loud and clear: the photographer seeking money and success above all doesn’t get what he wants, while the innocent young musicians (Annabel’s friends) eventually find justice.

To conclude, Two Evil Eyes is an enjoyable tribute to Poe which works above all in its first part, the one shot by George Romero. The second part, perhaps more a thriller than a horror, is still enjoyable (for example, there’s an interesting dream scene, although not too memorable) and in the end I can only recommend the vision of this interesting pairing of two great horror masters. Ciao!