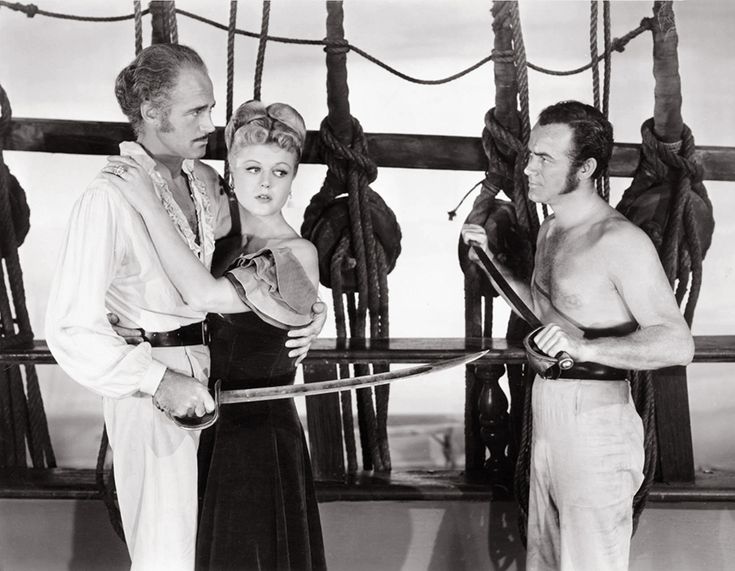 A young American captain, hero of the War of Independence. Another captain in love with a young beautiful woman and forced to put pride aside and act as the first officer. A greedy and manipulative femme fatale. A secret mission, ten million dollars in solid gold and a crew loyal to the first officer. Many small models of warships floating in a bathtub. An epic music that doesn’t stop even for a minute to accompany equally epic dialogues. A predictable storyline with (un)expected twists basically revealed by the title: Mutiny. The ingredients for a 70-years old film which aged badly and it’s now full of moments of involuntary comedy are all there!

Mutiny was released in 1952 under the direction of Edward Dmytryk and starred Mark Stevens (the hero), Patrick Knowles (the lover), and Angela Lansbury (the femme fatale). Unfortunately, its value is now only archaeological, historical, given that in the eyes of a modern spectator nothing works. All the decisions of the protagonists are underlined by theatrical and unnatural dialogues. The only female character in the entire film suggests that a woman needs a lot of money in order to be happy. The Americans are all heroes and it’s no coincidence that the mutineers are all British. And the ending is so obvious, with the sense of honor emerging as the only element behind the actions of real men.

In short, if haven’t got it yet, it wasn’t easy for me to get to the end of this movie full of stereotypes and clichés. And, to be honest, I only watched it because my DVD copy of Michael Mann’s Collateral turned out to be defective and stopped working 42 minutes into the movie. Perhaps all my hatred towards Mutiny comes from the anger at not being able to finish to see Mann’s masterpiece with Tom Cruise and Jamie Foxx…

But if you want to see how a real hero can make 50 nautical miles on a floating wooden door; how a man in love could kill her fiancée in order to repay the debt of honor with the hero; and how small wooden model ships, when shot masterfully (!), still look like small wooden model ships, Mutiny is the film for you. It’s terrible today but I suspect that it was equally terrible in 1952. Ciao!