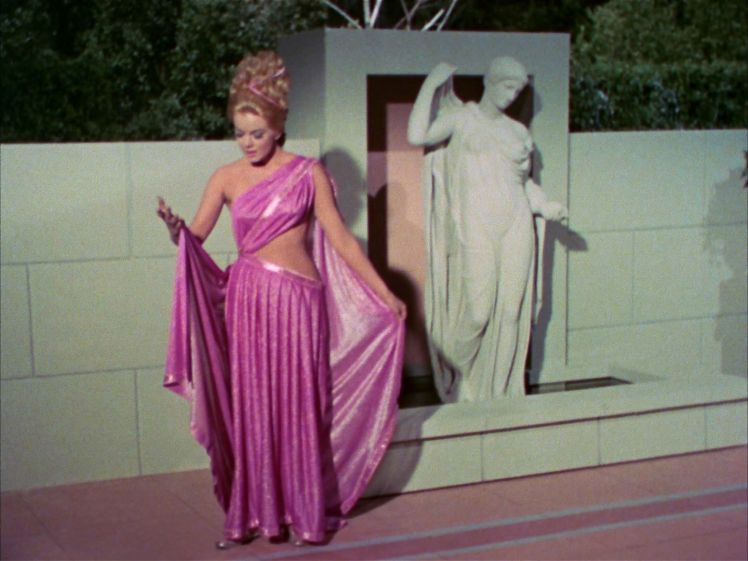 Who Mourns for Adonais? is, in my opinion, a big misstep in this second season which just started. After a brilliant start with Amok Time, this second episode merely reused old ideas even though the premise could have led to an interesting story. That’s a pity, and below I will try to explain the reasons behind my very negative judgment.

The USS Enterprise is in a sparsely populated area of ​​the Universe when it’s trapped by a force field resembling a… giant hand. Shortly afterwards, a giant head also appears inviting Kirk and his officers (but not the one with pointed ears, he adds) to his planet.

The person responsible for all this claims to be Apollo, the ancient Greek God (played by Michael Forest). Such premise is interesting: what if the ancient gods had been nothing but beings from other planets with very sophisticated technologies? Certainly the inhabitants of the Earth of five thousand years before could have considered them gods!

Unfortunately, however, the development of the plot is anything but interesting. While Spock tries to turn off Apollo’s power source from the Enterprise, Kirk and his companions wearily interact with the awfully dressed powerful being. Thus, there are a few ideas already seen in the first season. There’s a bit of Space Seed, with the historian Carolyn Palamas (Leslie Parrish) falling madly in love with Apollo, just like Lieutenant McGivers did with Khan, and eventually saving the day. And there’s also an echo of The Squire of Gothos: Apollo can do whatever he wants to the landing party thanks to his mysterious energy just like Trelane could thanks to his powers.

The recycling of ideas is rarely interesting, and this is no exception. Above all, I didn’t expect it in the second season, or at least not so soon! This doesn’t mean that the episode is completely awful. For example, it’s nice to see the attention given to the introduction of Pavel Chekov and to the continuous development of the stubborn Montgomery Scott (he’s in love with Carolyn and he’s also very jealous!) who seldom follows his orders. In the original series, discipline in Starfleet was severely lacking, it seems! Finally, the idea that the deities’ power depended on the number of believers and followers is intriguing, and incidentally is one of the key ideas of the Discworld created by the great Terry Pratchett!

But are these few elements sufficient to save Who Mourns for Adonais? No, they’re not. There are too many sexist dialogues and situations (the character of Carolyn is the classic blonde prone to love at first sight and easily conquered by a new dress), which should be accepted given that the episode came out in 1968 but don’t do anything to improve its quality. Mostly, though, the story feels repetitive and therefore boring. In short, this doesn’t enter the list of episodes worthy of a second viewing! Ciao!

PS: at the end I expected Carolyn to be pregnant after the scene in which Apollo was clearly raping her. It turns out that it wasn’t the case, but then I read on Memory Alpha that that was exactly the initial idea. It would have been much tougher as an episode, but I doubt that my negative opinion would have changed much.

Next episode: The Changeling