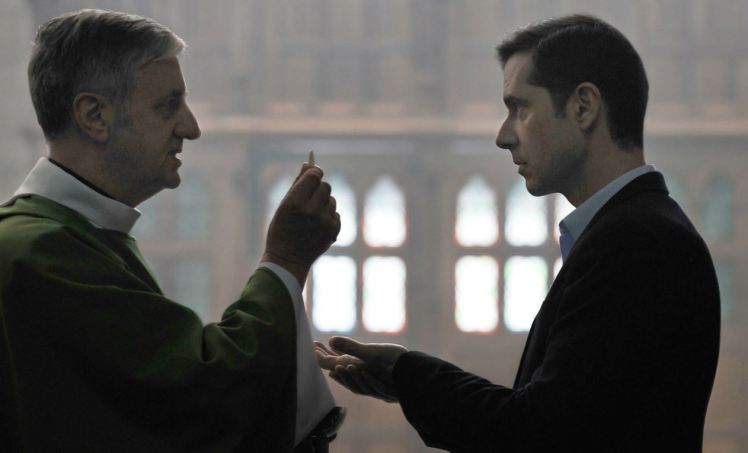 The archbishop of Lyon, France, is called Philippe Barbarin. Under his responsibility, and under the responsibility of many before him, father Bernard Preynat was able to abuse dozens and dozens of children who passed under his hands as scouts and altar boys. In March 2019, Barbarin resigned but the Pope Francisco refused his resignation invoking the presumption of innocence. Preynat has admitted his abuses and is still a free man, and Barbarin was not sentenced even though it’s public knowledge that he defended Preynat despite being aware of his misdeeds.

In 2018 the French director François Ozon decided to make a film about this sordid story entitled Grâce à Dieu (By the grace of God is the English title), that is French for Thank God (in February 2019 it won the Silver Bear at the Berlin Festival). Why this title? It’s a quote from a speech of that beautiful person that is Archbishop Barbarin, who said: “Thank God, Preynat’s crimes are prescribed“. Yes, you read that correctly. A chilling statement, but on the other hand evidently his faith in God is so great that he believes that the almighty also wrote the French laws regarding the prescription of pedophilia crimes.

Ozon didn’t make a documentary, although initially he intended to do so, and preferred to make a film based on real events. The film tells the story of three men abused by Preynat who many years after the abuses found the courage to bring to light what happened to them as children. The three main actors are Melvil Poupaud, Swann Arlaud and an unrecognizable Denis Ménochet that apparently has doubled in size compared to when the whole world got to know him as Monsieur Lapadite in Tarantino’s Inglorious basterds (2009). All three actors did a great job and gave strength to a film that, even if only for the story it tells, has strength to sell.

At the beginning, it must be said, the story is a bit heavy with a lot of off-screen narration to report all the emails and messages between the character played by Poupaud and various persons working for the diocese of Lyon. Then, when the character of Ménochet appears and the association La parole libérée (The freed word) is created, the rhythm improves considerably and grows even more with the fantastic (albeit tragic) character of Arlaud, the most damaged of the three, the one living with the harshest consequences of the abuses of the priest Bernard Preynat. Both thanks to these three stories and those of the numerous characters of the rest of the cast, the message clearly emerges that such abuses on children under fifteen leave scars with which it’s hard to live normal lives, wounds that ruin families and interpersonal relationships forever.

The film is very hard and I came out of the cinema a bit dazed: Ozon succeeded in making an impacting film, which leaves its mark. A criticism that I feel I can make is that the film fails to be 100% fiction and fails to be 100% documentary. There’s too much attention to small details (such as the precise wording of the emails) and interesting lives and characters are depicted without deepening too much into their psychological aspects. Still, By the grace of God is a powerful, interesting movie that everyone should see. Together with Spotlight (2015) by Tom McCarthy and, among others, The Magdalene sisters (2002) by Peter Mullan, it’s a film that should be shown in all schools! Ciao!

4 risposte a "By The Grace Of God: Movie Review"