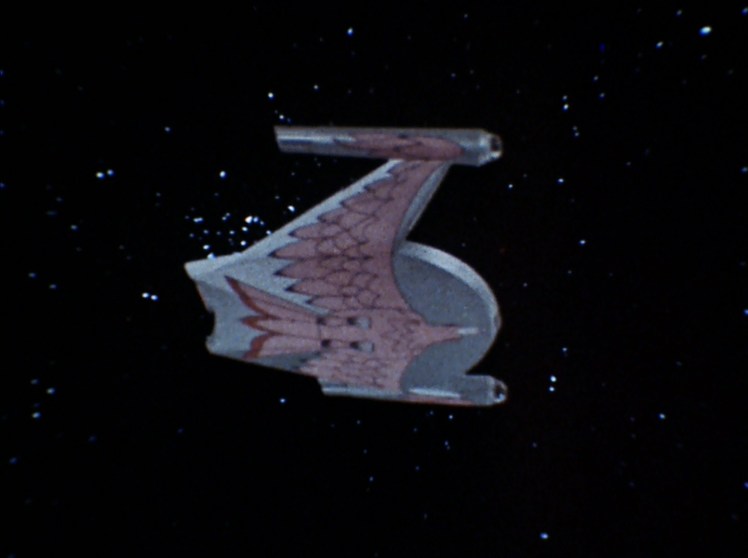 It’s exciting to watch Star Trek: The Original Series because at every episode there’s a new idea popping up that I’ve seen developed in later series like The Next Generation, Deep Space Nine, and Voyager. And in this fourteenth episode nothing less than the Romulans are introduced! In Balance of Terror, the USS Enterprise goes to rescue some outposts along the neutral zone between Federation territory and the Romulan Empire. He discovers that an invisible enemy is destroying them one by one and launches herself in pursuit of the aggressors after realizing that, should they be allowed to get back safely, the Romulans would immediately declare war on the Federation because of its manifest weakness.

The episode is based on Dick Powell’s 1957 film The Enemy Below with Robert Mitchum and Curd Jürgens. In the obvious parallel, the Enterprise is an American destroyer that in 1943 intercepts a German U-boot, invisible underwater just like the Romulan ship is invisible thanks to its cloaking device. I found it interesting to find out how the cloaking rules have changed over time, say from TOS to TNG and DS9. Here, the instruments on board are able to identify the hidden ship, but the latter is invisible to the naked eye. In the subsequent incarnations of Star Trek the concealment makes the ship invisible even to the detection instruments, of course!

Returning to the episode, it is a battle of wits between the two captains: Kirk on one side and the commander played by Mark Lenard (he’ll be Sarek, Spock’s father, on more than one occasion afterwards!). Despite the science fiction setting, it’s very clear that scifi here is only a thin cover over the naval battle featured in Powell’s film. In fact, the most interesting part of the episode is the creation of the Romulan race which is described as very hierarchically organized and with military titles based on the Roman empire. The uniforms were then re-used and updated only marginally in TNG, and of course Romulans look just like Vulcans. I was surprised to discover that Spock himself didn’t know the history of the Romulans: I thought that the fact that they initially were Vulcan revolutionaries was known on Vulcan!

And finally, here is also the trademark of the Romulan fleet: the cloaking device! It’s brilliant that an idea born to save on production costs (it would have been prohibitive to create all the special effects necessary for the battle between the two spaceships) has been so effective, we’ve seen it so many times in all Star Trek incarnations! For the rest, the episode works well, it creates tension, it amuses, but it’s difficult to give credit to Paul Schneider, the screenwriter, since the plagiarism of the film with Robert Mitchum is obvious and (probably) declared. I enjoyed the excellent interpretation of Lenard that luckily will be reused a lot in future Star Trek, and above all I admired the genesis of one of the most iconic races of the brand! Ciao!

PS: in the end there is only one victim in the crew of the Enterprise, poor Robert Tomlinson (Stephen Mines). Of course we had known him at the beginning of the episode when Captain Kirk was celebrating his marriage with the young Angela Martine (Barbara Baldavin)! Bad luck!

Previous episode: The Conscience of the King