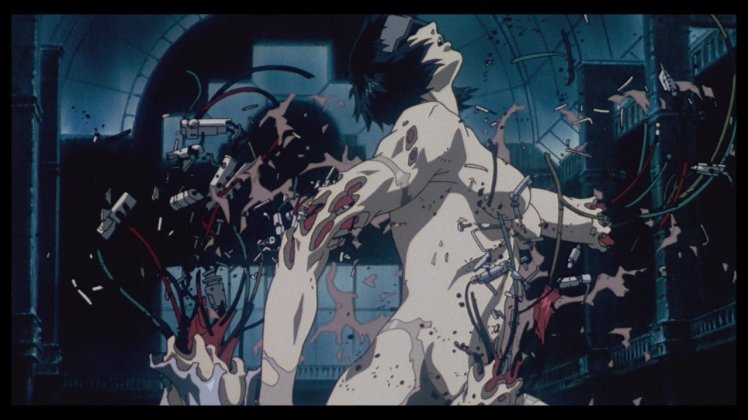 Kôkaku Kidôtai (Ghost in the Shell) is a Japanese animated film of 1995 directed by Mamoru Oshii and based on the manga written by Shirow Masamune. Among the various products related to the Ghost in the Shell brand, the latest is the 2017 US movie with Scarlett Johansson reviewed in Italian here. At the time I wrote that the best thing about the latter is that it made me curious about what had originated it. So about a year ago I saw the 1995 animated film for the first time, and now that I’ve watched it a second time I’m ready to write two lines on it.

First of all, the drawings and the animation are literally incredible. Everything is simply a joy for the eyes! Not to mention the soundtrack, spectacular! And it seems that the director was aware of it, so much so that he allowed himself long minutes of wonderful dialogue-free scenes simply accompanied by music. Even if only for these reasons alone, it would be worth watching Ghost in the Shell. But there’s more!

This animated feature deals with profound themes like what’s life and what is/should be the evolution of the human species, and it does so while also developing an interesting (but very complicated) plot full of action and intrigue. Can a software be considered a form of life? If there’s nothing left of a human being but the brain in a cybernetic body, is he still human? Where’s the soul (ghost) of a living being? These questions are particularly intriguing nowadays, as brain grafts are about to become reality. You don’t believe me? Google “Neuralink” and see what you find!

And remember that Ghost in the Shell came out in 1995! Cyberpunk already existed thanks to the works of Bruce Sterling and William Gibson, but we can still consider the film directed by Oshii as one of the first works that created and gave popularity to this science fiction sub-genre! And its influence can be seen in even more successful products like, to name one, the Wachowskis’ Matrix saga (have you noticed the opening credits in green letters over a black background?).

So, is Ghost in the Shell a perfect movie? No, it’s not. Perhaps due to the desire to condense in less than two hours all the content of the Shirow Masamune manga , the plot is really hard to follow (even on second watch), with section 6 battling with section 9 and revolutions abroad leading dignitaries to ask for asylum in Japan… But this inscrutability makes the movie interesting if you have the patience to watch it again and again! But I don’t want to justify too much what can probably be considered as a shortcoming of the movie. I simply think that such a shortcoming doesn’t affect the value of Ghost in the Shell, which I surely recommend! Ciao!

6 risposte a "Ghost in the Shell: Movie Review"