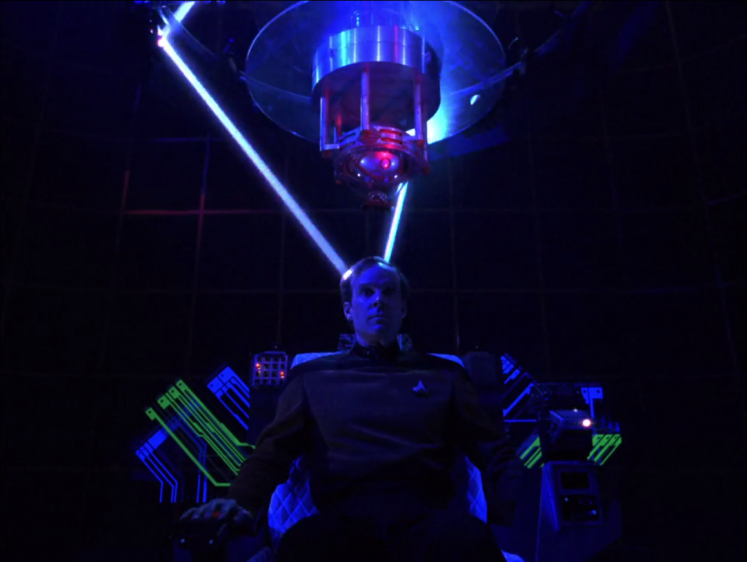 The Enterprise crosses a wormhole and not everything is what it seems. The mystery persists and suspicions build up around Data until at the very last moment he has to confess that yes, he is withholding something — and just when you would think that TNG is breaking its own rules, it is revealed that Data is following Picard‘s orders, before Picard’s memory was erased by xenophobic aliens. It is an interesting episode, ending up not where one would expect compared to where the episode starts. Troi’s role in this episode in particular is more pronounced, sensing that something is wrong. But it is a bottle show that is a bit slow, and the flashbacks to one day earlier do slow the episode down considerably. Also, in front of the alien menace Picard seemed to me too eager to propose a solution that involves having the brains of the entire crew tampered with — twice! The episode’s beginning does echo nicely the rest of the episode — the search for clues — as we see Gainan pretending to be the femme fatale in Picard’s holodeck detective noir adventure! Also (not that they would make it) I would certainly watch an episode entirely devoted to what the crew does when they have free time, like in the first minute of this episode!

Another experimental episode, told from the point of view of the aliens. A spiritual sequel to the Prime Directive episode “Who Watches the Watchers?” in season 3, this is the definitive episode on what happens when the Federation considers that a civilization is advanced enough to join its ranks in the great peaceful interstellar brotherhood. No Captain’s Log here: things start in media res, with Riker wounded and captured, and this increases the stakes compared to a normal run-of-the-mill episode. We take a good look at the political complexities of the planet in question, getting to know presidents, advisors, ministers, scientists, common folk, and their often opposing agendas and worldviews. The parallels with our world are many and very much on purpose: the sets and costumes are all slight variations of their late-20th-century Earth equivalents in order to make us identify with these people. Technology changing society, investing in innovation versus conserving traditions, openness versus isolationism: we can easily imagine these debates occurring on Earth if/when the time comes. Actually, there is a reading of the episode that fans of UFOs and conspiracy theories and of The X-Files can enjoy: this is happening right now on Earth, and world leaders have had to make such choices! Riker’s line “It’s far more likely that I’m a weather balloon than an alien” is an exact riff on that, an open reference to the Roswell UFO crash! (The laugh-out-loud moment when the nurse asks him to make love to her too: sex with aliens is a common recollection of close encounters of the third kind!) In the end, this civilization decides it is not yet time, but at least the lead scientist gets a happy end with her leaving with the Enterprise.

The quote:
Chancellor Durken: “I will have to say this morning, I was the leader of the universe as I knew it. This afternoon, I am only a voice in a chorus. But I think it was a good day.”

Lieutenant Barclay (from season 3’s “Hollow Pursuits“) is the “chosen one” by an alien probe and suddenly becomes way more intelligent than everyone else, eventually overtaking the Enterprise’s computer; and once his mission completed he (nearly) becomes his old self again. This reminded me of the plot of the science fiction classic book “Flowers for Algernon“! The progressive increase in Barclay’s abilities is very well brought about — and very well acted — and the show’s production values shine with the impressive set and lighting of the man-machine interface with blue lasers! I found the idea of the Cytherians intresting, a race of explorers sending probes out there that will bring samples back to them, as opposed to the Enterprise, which is actively exploring. The Cytherian’s questioning/cataloguing of humans reads like something out of Carl Sagan‘s “Cosmos“! I wonder whether this means that the Federation will soon have access to technology that allows them to travel halfway across the galaxy so quickly? (I guess the Voyager could make use of that!)

Alumni-spotting:
Kay E. Kuter (the Cytherian) was “The Calusari” (a Romanian exorcist) in that episode of The X-Files!

The subplot of tensions with the Romulans continues in this episodes, where any opportunity is good to suspect spies, sabotage and conspiracies. When the threat of war is real, how much is a healthy dose of paranoia and when does one go over to the side of totalitarian ideologue? Do politics and war strategy justify to overlook proof (or lack of proof)? The episode is a court drama, like the landmark “The Measure of a Man” before it, and somewhat borrows its structure from “Twelve Angry Men” by first leaning towards the obvious explanation of sabotage then by having Picard being the only one who persists looking at the details. Things accelerate at the end, with things becoming personal between Picard and investigator Admiral Satie — perhaps things escalate too quickly but time is limited in an episode. It is remarkable that TNG does not make things too bombastic or victorious, preferring to let the actors’ performances, silences and lack of music tell the story. A truly powerful episode.

Alumni-spotting:
The writer, Jeri Taylor, joined the crew in season 4, and will become one of the Star Trek franchise’s most important producers, in TNG and VOY.

The quote:
Worf: “Sir, the Federation does have enemies! We must seek them out!”
Picard: “Oh, yes. That’s how it starts. But the road from legitimate suspicion to rampant paranoia is very much shorter than we think. Something is wrong here, Mr. Worf; I don’t like what we have become!”

Doctor Beverly falls in love with an alien…who proves to be a slug within a humanoid host! (Another inspiration for Stargate SG-1?) An episode on how we feel about love and what we associate with love — clearly for humans the whole package is important, physical appearance, voice, touch. While this is not an exploration of sexuality per se, the subtext is there and this episode could be seen as a proto-manifesto for tolerance of LGBTI people. Beverly is deeply conflicted about the changes in physical appearance of her lover Odan as he changes hosts, and the situation is made even more complex due to her friendship with Riker and due to the final host being a woman. But with Troi’s advice Beverly does not directly reject the situation, she just humbly acknowledges that this is beyond her and that “perhaps, someday, our ability to love won’t be so limited”. An optimistic message. It is also funny to see Picard’s internalized jealousy at the situation, he hardly allows himself to say a word — what’s more he offers his support, which is a very mature approach to the situation many should look up to in the year 2018. I would have liked for the performances of the three actors portraying Odan to have been more alike — at least Frakes gets sort of a pass because the graft was not working well and Odan was in great pain.

The quote:
Odan/Riker: “Speak softly, governor. Those who cannot hear an angry shout, may strain to hear a whisper.”

TNG does “The Manchurian Candidate” in this episode where Geordi, unbeknownst to him, is brainwashed by the Romulans to kill a Klingon diplomat. All this is conducted by a mysterious Romulan female Commander, still in shadows. The trick is discovered, of course, by Data using all his technobabble science. The situation awkwardly leaves strong suspicions that some Klingons and Romulans are in alliance, but diplomatic protocols prevail and suspicions remain suspicions. It’s a predictable plot, but overall this is a tense and very entertaining episode, TNG in top form.

Alumni spotting:
Majel Barrett was the wife of Gene Roddenberry. Although she has been voicing the ship’s computer since the beginning, this is the first time she is credited for it (she has also been on TNG before as… Deanna Troi’s mother).

The quote:
Data: “I have surmised that Commander La Forge was conditioned by Romulans. A process referred to historically, and somewhat inaccurately, as ‘brainwashing’.”

We come to the season finale, which since last year’s explosive episode is now established to be a cliffhanger for next season! It is wholly dedicated to the Klingons‘ battle for power and Worf‘s family history — it is interesting to realize that the character who started as a late addition to the show when the pilot was being written has now been developed so much so as to be given such a prominent place! Klingon all-out civil war and royal factions, alliances to clear Worf’s family name, secret alliances with the Romulans, Klingons trying to seduce Picard, a Romulan revealed to look like Tasha Yar, Worf resigning from Starfleet, space battles, special effects that certainly don’t feel cheap, themes of honor, duty, trust — there’s so much going on here! Perhaps it doesn’t end with as much of a punch as last season, it would be hard to top that off, but the ending is powerful nevertheless. Written by TNG’s Mr. Klingon, Ron Moore, and directed by Cliff Bole, this episode tops off season 4 in style!

The quote:
Worf: “I’ve been told that patience is sometimes a more effective weapon than the sword.”
Picard: “Patience is a Human virtue… one that I’m glad to see you’ve taken to heart. But doesn’t this situation require a more… Klingon response?”

It has been a steady upward trend in quality since TNG‘s beginning, and I have the impression I have wrapped up the show’s best season yet! Compared to the already excellent season 3, season 4 has much more character work, starting off with a string of episodes like “Family” that show that this is a more mature series and not “just” the science fiction of its earlier years. With enough episodes in its belt, TNG starts playing with its formula, and season 4 has many experimental episodes like “Data’s Day” or “First Contact“. Season 4 also looks better than previous seasons, more cinematic, contrasted, rich, even closer to today’s standards and so more 2018-compatible than season 1 — this is probably a result of more work from the director of photography (Marvin Rush took over that duty in season 3) and of a higher budget. It is also the season that saw the departure of Wil Wheaton as Wes Crusher; like Denise Crosby (Tasha Yar) before him, it’s interesting that his character was not replaced with another — that says something about how essential the writers viewed them! From now on the core group of actors will not change until the end.

The hull presents no breach, engines operational, reactor within normal parameters. We cruise on to uncharted territory with season 5!