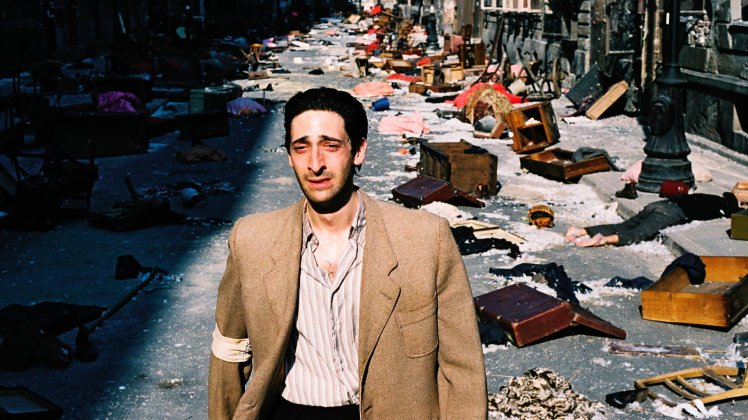 I admit it: I hadn’t seen this 2002 movie directed by Roman Polanski, a director that I greatly admire (for example, I wrote about his Death and the maiden here). I finally saw The Pianist, starring Adrien Brody, and it left me speechless.

The movie tells the true story of Wladyslaw Szpilman, a Polish Jewish pianist who’s surprised with his family by the Nazi invasion of Poland in the winter of 1939 (the scene in which his radio program is interrupted by Nazi bombs is really powerful). In the movie we follow his tragic vicissitudes until 1945, immediately after the end of the war. We witness how the Jews’ conditions in occupied Poland gradually get worse, firstly “only” the targets of harassment and arrogance, and then imprisoned in the Warsaw ghetto and later deported to the concentration camps. Despite sadness dominating the scene, at least the poor Szpilman survives the war. In fact he died in 2000 at the age of 88 years.

And what can I say about the movie? It’s fantastic. We see everything through the eyes of the protagonist, a choice that makes everything very raw and shocking. We see murders, shootings, corpses, cruelty perpetrated by Germans, Poles, Jews… but Polanski under no circumstances highlights these events with epic music and slow-motion to make everything more dramatic. He’s an amazing director and he knows that there is no need for such techniques: the images are already dramatic enough, and the director simply and coldly documents the facts as if from a distance.

The story is really moving. The first part reminded me of Maus, the great graphic novel by Art Spiegelman, with the rich Jewish family waiting for the situation to solve itself. In this sense the scene in which everyone in 1940 rejoices at the entry into the war of France and Great Britain is both beautiful and sad (and Dunkirk is there to remind us how that initial campaign would end). Then we see Szpilman’s desperate attempts to survive by hiding in Warsaw before and during the Warsaw uprising in 1944. And finally we see him returning to work at the radio after the war, after all that suffering. It’s a great movie telling a great story. And if you want to read about Wilm Hosenfeld, the German officer who saved Szpilman shortly before the liberation of the city, you’ll discover another great (and tragic) story. Ciao!

7 risposte a "The Pianist: Movie Review"