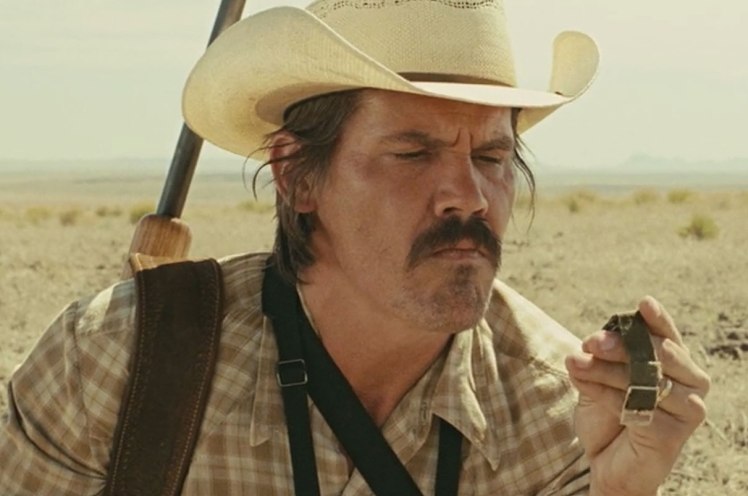 I remember the first time I saw No Country for Old Men: on DVD with some friends, eight or nine years ago. I remember that I liked it, but nothing more. I just saw the movie again and I do not understand why it had not impressed me so much the first time… it’s a great movie! It seems like an obvious thing to say, given that it was directed by the Coen brothers (they also wrote the screenplay, based on the novel by Cormac McCarthy), that it features an exceptional cast (Tommy Lee Jones, Javier Bardem, Josh Brolin and Woody Harrelson), that it was a huge success at the box office (more than 170 million dollars earned worldwide against the 25 spent to make it), and that it won various Oscars (Best Film, Best Supporting Actor, Best Director and Best Screenplay)… anyway, here’s my two cents on the movie.

No country for old men is a 2007 film directed by the Coen brothers, who were already well-known for their recognizable style that manages to mix comedy with drama with thriller (Barton Fink, 1991, Fargo, 1996, The Big Lebowski, 1998). This movie does not represent a departure from their genres’ mix, even if the tone is certainly more serious and the comedy struggles to come out (but it does: for instance in the relationship between Brolin and his young wife played by Kelly MacDonald, who masks her strong Scottish accent with a perfect Texan one without any effort whatsoever). This had to be expected given that the story comes from the brilliant mind of Cormac McCarthy who is certainly not known for his comic skills (you don’t believe me? Read Child of God, 1973, or The road, 2006).

In the film we follow three main characters: the sheriff played by Tommy Lee Jones, the perfect choice for the role given his Texan origins, a psychopathic murderer played by Javier Bardem who’s scary in every scene he’s in (among other things, he either kills or tries to kill even everyone he meets), and Josh Brolin who can convincingly interpret a stubborn hunter and Vietnam veteran (the film takes place in 1980) who all of a sudden finds a lot of money and tries to change his life for the better. And as usual when someone apparently innocent/pure finds herself with a lot of money that does not belong to her, things do not go well (see Fargo, or A Simple Plan by Sam Raimi, 1998, or even the classic Psycho, 1960). Although each of these three characters follows the other, they never meet, which reminds me of The Fifth Element by Luc Besson, where Gary Oldman never meets his antagonist Bruce Willis. On the other hand, they meet various other characters, but I do not want to spoil the story altogether. I just want to list a few reasons why this film deserves being seen (possibly, more than once).

The direction. The film has an incredible rhythm and two hours feel like fifteen minutes. Everything is shot in a spectacular way, everything works, from the composition of the scenes to the camera movements that always accompany the tone of the film appropriately.

The actors. They are all great, and perfectly cast. Interestingly, the Coens did not have in mind any of the actors they ended up using when writing the script.

The dialogues. In the film there is very little music and the dialogues play a predominant role. Not even one of these is wasted or seems out of place. Each character speaks in a different way: from the unnatural calm of Bardem (which expertly masks his Spanish accent), to the frankness of Brolin, up to the ruminations of Jones, all the characters come out as credible and multifaceted.

The message. The tone of the film is clear since the beginning, with Jones’s first monologue. His nostalgia for the times when the sheriffs could go around unarmed makes us realize that the film is about the passage of time, places changing over time, people who become old and are suddenly out of place – no country for old men, as spelled in the title. In the book the thing is explored even more thanks to the background of the sheriff and his remorse related to what happened to him in World War II. And even if the movie takes place in Texas, it’s easy to see how the Bardem’s character represents the insane/mad changes that we live basically everywhere, and that the sheriff represents those parts of society that struggle to adapt to the new rules. Surely I’m not the first one to think of a parallel between the murderer played by Bardem and Heath Ledger’s Joker in The Dark Knight by Christopher Nolan (2008), another crazy character challenging those who were used to certain rules and find themselves inadequate in the modern world. It’s nice how the Coen brothers decide to open and close the movie: the interior monologue of Jones that introduces us to the film is ideally concluded by the monologue made in front of his wife with his two dreams with his father as the protagonist. The first, in particular, points out how the only one in the whole film who does not give a damn about money is also the only one not to die (true, neither does Bardem, but he goes away in a pretty bad shape). It may seem trivial, but I find it a strong message and every time I see it in a film I can not help but think about it.

The cinematography. Texas is basically a character in this film. The colors are always beautiful and never chosen at random. Each image is worthy of admiration, whether it features the desert under the sun or a city at night, or the dingy interiors of motels or the ultra-modern buildings where the drug lords manage their shady affairs.

1980. It seems to be there! And not because there are children on bicycles (which in any case are also there, towards the end!) and John Carpenter’s The Thing’s posters in the cellars as in Stranger Things. The 80s are rebuilt to the smallest detail, from clothes to cars to appliances, and not even for a second there is any doubt about the time period of the movie.

The action scenes. The film begins with an action scene (as well as the book): Javier Bardem who strangles the deputy with his own handcuffs. Impressive. The scene is realistic, there’s a lot of blood, the two actors are convincing, and the result is pure shock. Welcome to No Country for Old Men. The rest of the movie doesn’t slow down not even for a minute.

The scene with Bardem flipping the coin with the old man in the gas station. Together with the scene between Waltz and Ménochet in Inglorious Basterds (2009), this is one of the most disturbing and well-rounded dialogues of recent cinema.

So… I wrote a lot, I hope I have not bored you too much! Ciao!

3 risposte a "No Country For Old Men: Movie Review"