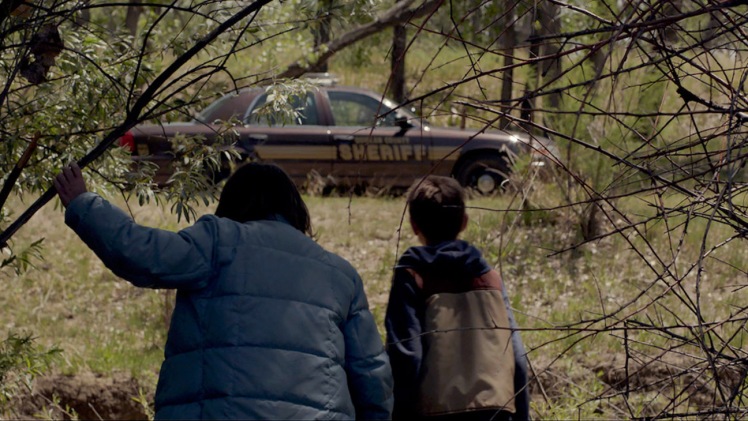 Here’s another debut (like, for example, the recently reviewed Duel, 1971, and Ladybird, 2017)! It’s true that Jon Watts already worked as a director before this Cop car (2015), but this is his first feature film. And as for many other things in this World (such as, for instance, Tremors, 1990), we must thank Kevin Bacon for the existence of this movie. Not only is he the protagonist and does he provide a great performance, but he’s also the executive producer and he was the one single person who most believed in the project, according to Jon Watts and his collaborator and co-screenwriter Christopher Ford (these two have also worked together in the recent Spider-man: Homecoming del 2017).

Bacon declared that he read the screenplay in one breath (“not checkin’ my emails“) and it was so good that he was able to picture everything in his head. That’s how Cop car was born. The idea comes from a recurrent dream of the director as a kid in which he was driving together with his brother in his town without anybody apparently noticing anything odd. Add to this that the car is a police car, and that’s the movie! And what kind of movie is it?

Cop car is a thriller whose premise is the following: two 12 years old kids find an apparently abandoned police car and start driving it. This leads to a series of unfortunate events because the owner of the car is sheriff Kevin Bacon, a sheriff far from being a model policeman…

Why does the movie work? It does because it creates a continuous tension in which it’s hard for the audience to guess what will happen next. Every action has realistic yet creative consequences in an atmosphere which ranges from being ridiculous (there are light moments both between the two kids, and in some scenes with the sheriff) to being serious, passing from being violent and dramatic (the ending is not at all predictable). I think that the closest movie to this one is Blue ruin (2013) by Jeremy Saulnier, and it’s another great film.

But let’s get back to Cop car: the plot is brilliant. It’s impossible not to think of the influence of the classic point & click adventures (Monkey island-style) in the desperate attempts of the sheriff to get back his car: “use shoelace with car door”, “change the radio frequency”, “use one kg of cocaine with the WC”… as I said, there’s a lot of irony in this movie!

Then, the two kids are brilliantly directed and they always seem natural, not an easy thing given their young age. Kevin Bacon is great and his enthusiasm comes across with his performance: he gave a lot of inputs for his character, including the way of talking and moving and that fantastic mustache. The rock/noise soundtrack is well done and it reminded me of the great rocker John Carpenter, which is always good. For instance, the very rhythmic beginning is close in spirit to that of In the mouth of madness, 1994. The use of silence is also reminiscent of classic cinema: Cop car permits us to think, and does not need to put one action scene after the other to maintain the attention of the audience. The movie creates a certain atmosphere, it creates tension, and let them maintain the viewer glued to the sofa from beginning to end.

And the direction is also very good! You don’t need to trust me on that, this is the movie that convinced Marvel to give Watts a high-budget movie such as Spider-man: Homecoming. After a low-budget movie such as Cop car, that choice was courageous. Moreover, it’s easy to see that this debut is a passion project, with Watts having nurtured the idea for years. He was able to shoot in the place where he was born and raised, in Fountain, Colorado (but, is the whole Colorado like South park???). We can see the passion and the enthusiasm that went into Cop car.

Ok, end of the trivia, thank you all. Ciao!