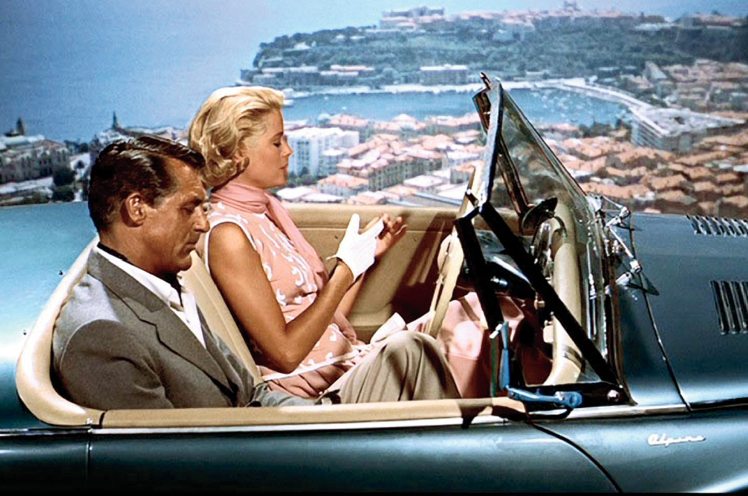 To catch a thief is a 1955 movie directed by Alfred Hitchcock. More than for the movie itself, it is remembered for being the last collaboration between the director and the charming Grace Kelly, after Dial M for Murder and Rear window, both made in 1954. It was their last collaboration not because of Hitchcock, who loved working with Kelly, but rather for her decision to abandon Hollywood when she was 26 years old, with only eleven movies done. But I will avoid the gossip and write down something about the movie…

Cary Grant plays John Robie, a former burglar nicknamed “the Cat“, who enjoys life in the South of France. But a series of new robberies done by a copycat burglar forces him to embark on an adventure to convince the police that he’s not responsible. Such adventure will lead him to interact with his former Resistance mates who all work in Bertani’s (Charles Vanel) restaurant, with Bertani’s daughter (Brigitte Auber) who’s in love with him,  and most importantly with the rich Jessie Stevens (Jessie Royce Landis) and her daughter Frances (Grace Kelly), with whom the Cat inevitably falls in love. Needless to say, at the end Grant will manage to prove his innocence and will conquer the sweet Kelly!

Now, Hitchcock was a genius, and I don’t need to repeat it here, but this movie really confirms that. I find it important to highlight that it came out 63 years ago, so some aspects and devices used in the movie may be considered obsolete nowadays. Despite this, To catch a thief doesn’t look its age, and no modern viewer will feel like watching a monster of another era.

The thing that stands out the most is the movie’s cinematography. The colors are brilliant, the scene composition is always perfect, and in the outdoor scenes you even get to distinguish the single bricks of the last of the buildings on the hill in the background! The depth of field is really impressive, clearly Hitchcock didn’t want to waste the opportunity to shoot in France. On the contrary, he wanted to appreciate it for its true value! But Hitchcock really outdid himself in the nocturnal scenes on the roofs, with an extremely theatrical green light creating the perfect tension to accompany the final moments of the movie. It shouldn’t surprise that the movie was awarded the Oscar for best cinematography! Apparently, the quality of the image is due to the movie being shot in VistaVision, a format which was has been used very little in cinematic history, that permitted producing 70mm negatives even if using 35mm film. So, when you get back to it, you have images with all the details that you like!

Of course, in some scenes you need to overlook certain things that were standard at the time: there are some dialogues between Grant and Kelly in which the lights are used solely to make their faces stand out, rather than to recreate a realistic setting. But, at the same time, there are also a couple of car chases in which Hitchcock shows off with a number of techniques such as helicopter shots (this was an innovation, they had to modify a Sikorsky H-5 in order to carry the camera on its side), shots with the camera close to the wheels and the road, fixed camera, and even the classical “car shaking unnaturally with projections in the background”. In modern cinema this reminds me of Tarantino who still uses the latter in a way that is deliberately revealing for the audience, such as in Kill Bill, 2003-2004.

What else? The chemistry between Grant and Kelly is undeniable, but the acting gives away the period in which the movie was shot, immediately after World War II. One curiosity: Cary Grant decided to retire in 1953 because his type of acting was being surpassed by method acting, which was brought to Hollywood by actors like Marlon Brando and James Dean (although it was Stanislavski who firstly introduced that method in Russian theatre at the end of the XIX century). Hitchcock, luckily, convinced Grant to get back to work.

Finally, the soundtrack is fantastic, orchestral and always good in highlighting the mood of every scene. It helps the rhythm of the movie, which never falters anyway. The plot also manages to remain interesting from the beginning to the end thanks to the interactions among the various characters. It’s almost a choral movie due to the importance of the actors other than the Grant-Kelly couple. And Hitchcock demonstrates his great sense of humor in many a scene. The movie is a thriller with a touch of romance, but the director introduces several comical elements which still manage to make the audience laugh. I want to avoid spoilers here, but you won’t be able not to laugh with the last line by Kelly; when Grant reveals that Foussard had a wooden leg; at the “leg or breast?“ question; and for the use of the fireworks in the intimate scene between the two main protagonists.

So, I won’t be the first to say it, but To catch a thief is a great movie which deserves to be seen! Ciao!

Una risposta a "To Catch A Thief: Movie Review"