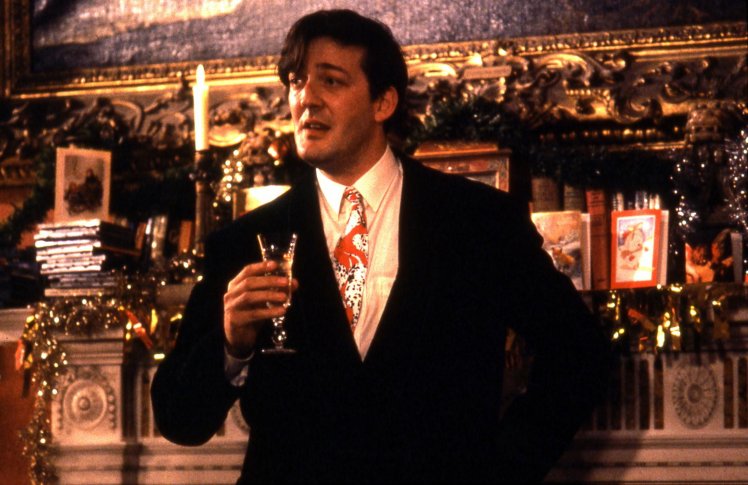 Peter’s friends is a 1992 movie directed by Kenneth Branagh and with an incredible cast of English actors. It’s a coral movie about friendship, similar to Beautiful girls (1996) by Ted Demme and Singles (1992) by Cameron Crowe. Would I recommend watching it? Certainly! Now let me explain why.

The plot of Peter’s friends is the following: Stephen Fry, a rebellious descendant of a noble English family, at the death of his father summons his old friends (with whom he shared an experience in an eccentric theatrical group) to his house to spend a couple of days together on New Year‘s eve. Ten years have passed since their last memorable night all together, of which we see a few moments at the beginning of the movie. So, the movie shows us this group of 30ish years old friends reuniting and makes us know them little by little. Each of them has her/his own personal history and oddities. And who are those friends?

Hugh Laurie (most people know him for being Dr House) and Imelda Staunton (she’s Dolores Umbridge in the Harry Potter movies) are not only friends, but they are also married. We are introduced to them as caring parents giving detailed instructions to the baby sitter before leaving here to go to Fry‘s house. Kenneth Branagh (who in his career has done almost everything, ranging from Shakespearean adaptations to being professor Gilderoy Lockhart in the second Harry Potter movie) arrives with his US wife, Rita Rudner, with whom he’s enjoying a life of success in the US thanks to a TV show of dubious quality.  Emma Thompson (professor Trelawney in the Harry Potter universe, as well as one thousand other things: she was also Branagh‘s wife when Peter’s friends was shot!) is a sort of hippie dressed with jute sacks who initially appears as a lonely and insecure person. Finally, the sparkling Alphonsia Emmanuel gets to the house with the nth of her countless lovers, all lasting too little for her friends to familiarize with.

Already you should figure out the reason why this movie works: the majority of the actors were really friends with each other! Many knew each other since college, where some of them joined the same theatrical group. Moreover, Fry and Laurie were the two halves of a well-known comic duo (some of their sketches are unforgettable: may I have your name?), and clearly Branagh was clever enough not to make them repeat their comical work in the movie (unlike other terrible examples in cinematic history, like the 1997 Mr Bean movie), but rather limited their direct interaction to a minimum.

So, this is a comedy! No, not at all. During the movie (warning: SPOILERS AHEAD!!!!) we discover a devastating trauma that prevents the Laurie–Staunton couple from having a normal life; we acknowledge the impossibility to have working sentimental relationships for Alphonsia Emmanuel; we live the drama of the unrequited love of Emma Thompson; we witness the dissolution of Branagh‘s marriage; and we also find out that Stephen Fry is HIV positive! The movie was made in the 90s, after all: would it be a contemporary one, it would probably feature a different illness. For example, Philadelphia by Jonathan Demme came out in 1993, and possibly the first movie to introduce AIDS in cinema was An early frost (1985). But I’m going off on a tangent, let me get back to Peter’s friends.

Am I recommending a drama to make you cry, then? No, I’m not, and that’s the reason why the movie is good. There are sad and dramatic moments, but there are also funny and light-hearted ones (mainly thanks to the US wife of Branagh obsessed with her weight, and thanks to the actual lover of Emmanuel who, to put it mildly, is a complete fool). Furthermore, not everyone will leave Fry‘s house more sad or lonely than before! imdb labels this movie as comedy, drama, and romance, and rightly so.

The best thing about the movie is its joyful atmosphere, despite the seriousness of some scenes, due to the fact that it is clear that everyone was having a great time making it. The whole thing is very much metacinematographic: the movie’s characters are happy to reunite and at the same time the actors are also happy to work together. The characters share ten-years-old memories as well as the actors interpreting them. Even the cook working for Fry was family: Phyllida Law was Emma Thompson‘s mother, so she was also Branagh‘s mother-in-law! I guess that Branagh found it easy to direct his friends, something that seems proved by the fact that it only took ten days to shoot the whole movie. Another metacinematographic touch is Fry‘s character being gay, exactly like Stephen Fry. So, the screenplay clearly plays with the actors’ lives and it’s easy to realize that the characters were created with those actors in mind.

One last thing: if you like 80s’ music, this is the movie for you. Contrarily to Singles (1992) and Beautiful girls (1996) with their 90s’ rock soundtracks, here you will listen to Tina Turner, Cindy Lauper, Elton John, and the Pretenders. Even the horrendous Queen are present, of course.

So, have I convinced you to give it a try? I think that you won’t regret it… Ciao!